Milledgeville, Ga. This unassuming Southern dame less than two hours South of Atlanta has been called one of Georgia’s prettiest small towns by Southern Living Magazine.

In addition to a storied history that includes several years as the state capitol, Milledgeville is home to Georgia College, which infuses the town with a young, upbeat energy.

McDonough, Ga. Just south of Atlanta is a small Georgia town where you can wile away time watching trains go by, get your heart racing at the Atlanta Motor Speedway, spend time drinking in a jail at Jailhouse Brewery, and savor BBQ at the original shack that launched Shane’s to stardom. In addition we recommend breakfast or lunch at GRITS and a visit to two of the best museum secrets in the state – the Heritage Park Veterans Museum and the Army Aviation Heritage Foundation.

Rutledge, Ga. When you reach the red barrel with stop signs affixed to it, you know you’ve arrived in this delightful historic town just three-miles from Georgia I-20. Your first stop is Rutledge Hardware, which is part museum, part general store, then grab an Amtrak sandwich for lunch at The Caboose. Save room for buttermilk pie from Yesterdays, and work it all off hiking or biking the trails at nearby Hard Labor Creek State Park.

Madison, Ga. Known as the town Sherman spared on his March to the Sea, Madison has one of the state’s oldest and largest National Historic Districts. Take a walking tour to see the beautiful antebellum architecture. Stay in the middle of it all at the charming James Madison Inn. Or step back in time with a milkshake at the Madison Drug Company. Just outside of Madison is Farmview Market with the only farm-to-table quick serve restaurant in Georgia. Take a class at the Schoolhouse or shop the best organic products in Georgia.

Eatonton, Ga. Eatonton is part of the historic heartland on Georgia’s Antebellum trail. It’s also located in the state’s lake country. In addition to lazy days on the water, stroll through this small town to see classic antebellum architecture, then tell tales on the porch at the Uncle Remus museum. My favorite place to visit in Eatonton is the Old School History Museum, located in the original 1916 Eatonton School. Remember blackboards, and Weekly Readers? This incredibly well-done museum has both, as well as the original cloakroom, a replica soda fountain, and even the photos of every graduating class from 1916 to the 1970’s.

Harlem, Ga. Nestled just off I-20 is Harlem Georgia, birthplace of Oliver Hardy, of the 30’s comic duo Laurel and Hardy. Pull off for a quick museum tour, or for something really special, visit during the Oliver Hardy Festival in October. For outdoor adventure we can’t recommend enough Savannah Rapids Park. And if you are a disc golfer, don’t miss the International Disc Golf Center.

Senoia, Ga. Senoia is probably better know as Woodbury, from the Walking Dead TV show which is filmed in town. You simply can’t visit here without taking a Walking Dead tour, either with a guide or self-guided. Grab a cup of joe at Senoia Coffee and Café, the real life Woodbury Coffee House. Plan to lunch at Nic and Normans, the restaurant owned by Walking Dead producers and actors. The shops along Main Street have everything a zombie hunter would need. Dahlonega, Ga. Nestled at the foothills of the Blue Ridge Mountains, Dahlonega is the site of the country’s first gold rush – explore the gold museum, and two different mines with a Gold Fever Tour package. Sip the best from Georgia’s wine country along the square with the Wine Walk Passport. And to really get the mountain flavor, come on Saturday’s in April – October when local musicians gather on the square for an Appalachian jam session.

Helen, Ga. Most people visit Helen for the Bavarian themed shops and restaurants, but we love Helen for it’s major outdoor adventures. Nearby Unicoi State Park has a wonderful adventure program including a harrowing zip line. And you must tube the Chattahoochee while in town. If the water is too low, the Helen Water Park is another best bet. Get your German fix with lunch at Hofer’s Bakery and Café, plus an afternoon pick me up with coffee and ice cream for the kids at one of our favorite haunts, Hot & Sweet just off main street.

Ellijay, Ga. This small town in North Georgia is best known for apples. But Ellijay also has a vibrant Main Street with quaint shops and restaurants. Our favorite is Mountain Treasures because in addition to adorable clothing, they also have a sample selection of wines from Cartecay Vineyards (an Ellijay winery) and moonshine! Outdoor adventurers will enjoy the serenity of Carter’s Lake. Rent a pontoon boat from the marina to explore 62 miles of natural shoreline or take a hike around the lake on several leisurely trails.

Before heading out on a road trip to any small Georgia Towns, take note of these awesome road trip games!

Small Georgia Towns Near the Coast

St. Mary’s, Ga. Along the coast of Georgia is the unassuming town of St. Mary’s. It is here you can get a ferry to the remote Cumberland Island National Seashore, one of several barrier islands in Georgia. Before you go, take a self-guided history tour downtown, check out the St. Mary’s Submarine Museum or just grab a bit of fresh seafood at Lang’s Marina Restaurant.

Darien, Ga. Located halfway between Savannah and Jacksonville, Darien is a coastal community worth a stop. Savor fresh fried shrimp at Skippers Fish Camp. Grab a wooden gun and play soldier through the recreated Fort King George, or take a boat from Darien to remote Sapelo Island, where you can enjoy deserted beaches, as well as tour the historic Reynolds Mansion. 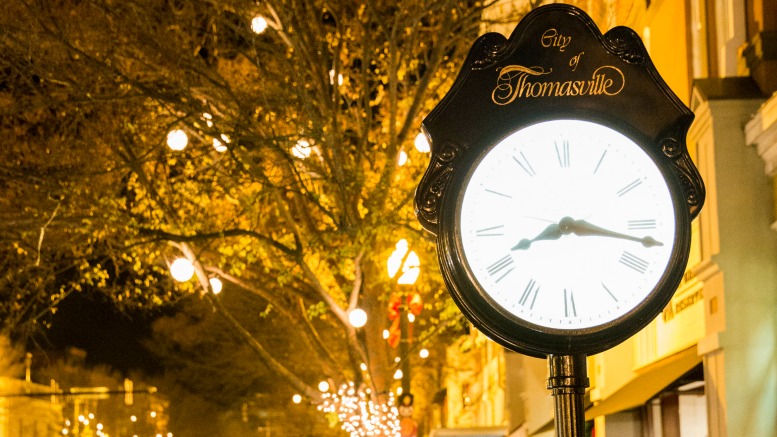 Thomasville, Ga. Thomasville is a true southern town with a modern flair. There are the traditional activities such as quail hunting on nearby plantations, and tours of the historic homes. However, Thomasville is also gathering a reputation as a foodie town. Food is part of the southern tradition of warmth and hospitality, and Thomasville is rich in both.  This small town in South Georgia is home to a world-renowned dairy and cheese shop (Sweet Grass Dairy), plus a vineyard (Farmer’s Daughter Vineyards Tasting Room). Thomasville chefs don’t just know where the food came from- they know the farmers who grew it…personally.

Albany, Ga. RiverFront Park is beautiful development along the Flint River where kids can play at the Turtle Grove Play Park, or sit on piano keys and listen to Ray Charles tunes (Charles is from Albany) while looking at a life-sized sculpture of the signer at his piano. There is also a splash fountain and three miles of bike trails.  Nearby is the not-to-be-missed Flint Riverquarium. Do your stomach a favor and get a hot dog at Jimmies. This iconic dog joint has been in operation at the same location (across from the bus station) since 1925. It’s off the beaten path a bit, but well worth it. The prices will make your wallet smile too!

Colquitt, Ga. This tiny small town in South Georgia of less than 2000 is best known for the theater company that performs the folk-life play Swamp Gravy. Each season is unique and tells the story of Southern heritage. It is probably a long drive to Colquitt, so make reservations early to stay at the beautiful Tarrer Inn. This beautiful old South Inn fills up quickly during show weekends. While in this part of the state, be sure to check out the Kolomoki Indian Mounds at Kolomoki Mounds State Park.

4 Comments on "Hidden Treasures: 13 Stunning Small Towns in Georgia (& what to do there)"